“…while PISA does not make money for OECD, the product of PISA enables OECD to participate and eventually, become a key actor in education governance.”

Every 3 years, talks on educational policies are magnified in the media as the vertical-positioned ranking table of the Programme for International Student Assessment (PISA) is released to much fanfare. Generating plenty of media headlines and the interest of politicians, PISA simplifies complex national education systems into a league table that is then open to interpretation by the public whether the participating country is a “PISA-winner or PISA-loser”.

PISA is essentially a large-scale, international standardized assessment formulated by the Organization for Economic Cooperation and Development (OECD), “an intergovernmental organization of industrialized countries” (NCES, n.d.). It is administered every three years to random samples of 15-year-old students from all over the world. Essentially, the key objective of the PISA test is to “assess the extent to which 15-years-old students near the end of compulsory education possess the key knowledge and skills for their full participation in society” (Figazzolo, 2009, p. 3). There are three major domains of the PISA tests, which are reading, mathematics, and science. Over the years, PISA has been gaining momentum and the number of participating countries keeps on increasing. 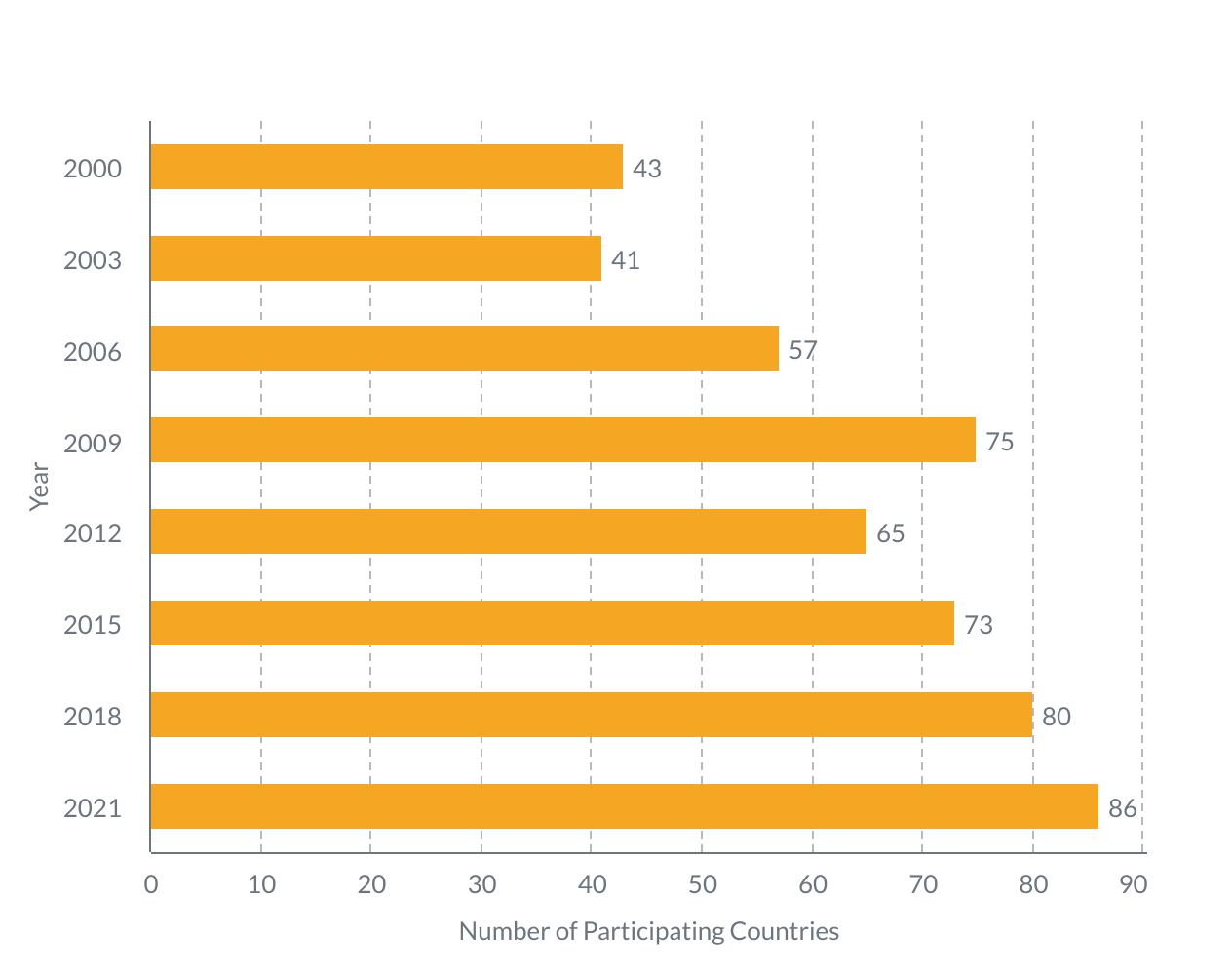 The numbers above undeniably show a growing trend of PISA among countries.

The rationale of selecting 15 year olds is because they are nearing the end of their secondary education and also in many countries around the world, students can decide if they would like to continue or stop education at this age. Most PISA samples were designed as two-stage stratified samples. In the first stage, schools were sampled systematically with probabilities proportional to the estimated size of their 15-year old population. At least 150 schools were selected in each country. In the second stage, students were selected in the sampled schools. Usually, 42 students were selected with equal probability. The target number of students could deviate from 42 but could not fall below 20.

The goal of PISA

One of PISA’s goals is “to develop valid comparisons across countries and cultures” (OECD, 2003, p.1). According to OECD PISA, PISA provides policy orientation as it yields an innovative approach (OECD, 2003). PISA also allows countries to monitor their education progress by meeting the learning objectives. Similarly, the PISA test is also extensive that it takes into account students’ background along with their academic performance.

As Steiner-Khamsi (2017, May 11) states in her talk that while PISA does not make money for OECD, the product of PISA enables OECD to participate and eventually, become a key actor in education governance. PISA orientates policy as its reporting methods provide comparisons and governments are able to draw policy plans from this. PISA is also very context-oriented, meaning the results are contextualized with OECD education indicators. Thus, PISA also examines “the quality of learning outcomes, the policy levels and contextual factors that shape these outcomes, and the broader private and social returns to investments in education” (OECD, 2003, p.7).

Finally, due to the breadth of geographical coverage, PISA has become a powerful and growing instrument in shaping education policy because it represents “a total of one-third of the world population and almost nine-tenths of the world’s gross domestic product (GDP)” (OECD, 2003, p. 1). All of these combined factors make PISA an appealing apparatus that attempts to measure and benchmark education on a global level, which has subsequently led to the increased visibility of international league tables of academic performance.